Where are the Android Tablet Music Readers?

News of latest release of forScore for the iPad has gotten me interested in working with the new generation media slates again.  With wedding season heating up, I’ve been scanning and moving my trio music to dropbox in the hopes of ditching that gig bag of books too (as I’ve already ditched most of my teaching bag).

The thing is, I’m not a fan of the iPad.  I’m not saying it’s a bad product or anything, just that it’s not my thing; personal preference. It’s still a little small for what I like in a music reader, and lacks active pen input, but I think it could work for our trio music. Most of our books are made from smaller letter sized paper, rather than larger sheet music (A4, I think).  With some cropping of the scans, this music comes out an acceptable size for the iPad display.  The trio music doesn’t require much in the way of markup, and in my limited use I’ve found the drawing tools in forScore to be much improved.

I’d love to give an Android tablet a try, as I already use an Android smartphone and I love my HTC Flyer, which at 7” is way too small to consider for music reading.  I’m not alone, as I’ve gotten a few emails from readers interested in Android tablets for sheet music.  So I went looking.  There are few enough apps in the Android market that are specifically for tablets anyway, and none of them are PDF music readers.

So, I emailed forScore to see if they might have any plans to break into the Android world and their reply echoed a lot of what I’ve been hearing from other app developers.  I do appreciate the time they took to explain.  Here is their response:

“First off, the biggest reason why we haven't jumped into the Android ring is simply a matter of resources: we started and continue to run our company during what will probably be considered the worst economic conditions of a generation, so we've always been very deliberate in how we spend our time and resources. We'd rather make a single product that's really solid and gets frequent updates than two products that don't always work well (the latter being the approach that all too many developers take).

Secondly, the iPad commands an overwhelming majority of market share at this point. We'd be spending more than half of our time working on a version that may only yield a small percentage of the sales we see with the App Store, so it's just not worth it at this point.

Finally, and really most importantly, the Android environment itself just isn't as attractive. From a hardware standpoint, there are a bunch of different devices all with varying capabilities (some have cameras, some don't, some are very fast, others can barely keep up). If we have to either ship an untested product or purchase one of every Android tablet out there, then that's a big issue to take into account. From a software standpoint, Apple's environment is just a lot more attractive and easier to work with on the whole. There's a level of integration that Google can't match, and the ubiquity of the platform makes it easier to get help from the community as needed.”

Also, while the hardware has become much more standardized on honeycomb (10” 1280x800 screens, Tegra2) there are still plenty of variations even in those (camera? SD card? microSD? full size USB?).

The real killer though is the screen.  The 10” widescreen is simply too narrow in portrait mode.  I swung by Best Buy to check them out again, and was able load a PDF of music from my dropbox.  While there are no specific music readers, there are plenty of tools to read PDF files.  The iPad is barely passable in size for me, so the narrower Android tablets were just too small.  With their smaller screens and lack of apps, I could not recommend an Android tablet for music reading.  Not on the current generation of hardware at least.

Posted by violajack at 6:04 PM 7 comments: Links to this post 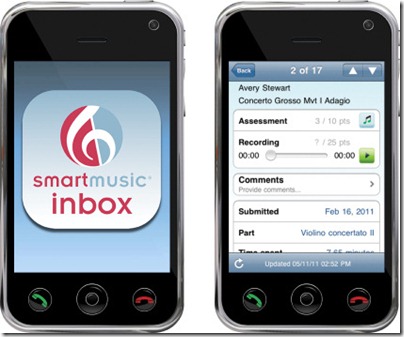 Looked what showed up in my feed this morning.  As reported by choirguy at techinmusiced, SmartMusic now has a mobile app.  It’s something educators have been calling for in the forums for a while now – a mobile app to sort through the inbox from your smartphone.  It’s available as an app for both iPhone and Android phones.

If you are using the educator version of SmartMusic, and you have students sending assignments into your inbox, it’s a great tool for going through them. You can view classes by student or assignment, listen to recording made by the students, grade and comment, add or edit points, and email from the app.

I installed and got as far as being told that my account is not set up for mobile access.  I wasn’t terribly surprised, as I don’t actually have an educator subscription.  This app only provides access to your grading inbox, and you only have one of those if you have an educator account.

I’ve been reminded by SmartMusic that I should have an educator account since I’m a teacher, but I still just have a student account.  Why?  Because the educator account offers very little value add for me as a private Suzuki teacher.  Suzuki music is not assessable, so I couldn’t create assignments around my core teaching material.  Sure, I could assign supplemental work, but none of the supplemental music I use in my studio is available in SmartMusic either, and yes, I’ve submitted the requests.  I really just use it to play the accompaniments to the Suzuki repertoire in the studio, and occasionally for some sight-reading practice.

I keep meaning to look more closely at the educator version and create a plan for actually implementing it in my studio, but I just haven’t had the time.  Private Suzuki teachers using the educator tools, feel free to leave a comment with ideas.

Posted by violajack at 10:55 AM 2 comments: Links to this post

A Wedding and a Kindle 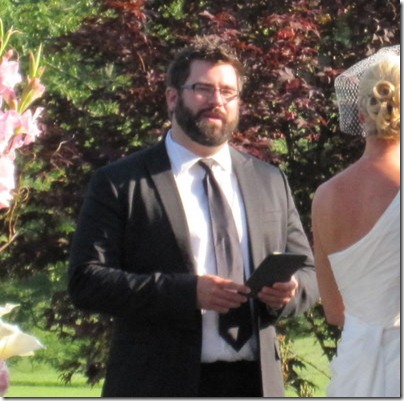 For all the weddings I've played in the Bay Area of San Francisco, and more specifically, in Silicon Valley, it wasn't until a recent family wedding in Ohio that I ran into an officiant reading the ceremony rites from a Kindle.  We've worked with a wedding coordinator who was using an iPad to keep track of things during the ceremony, but the officiants have always been working from either a book of rites, or a leather binder with loose papers.

I had a chance to speak with the Pastor after the reception for a bit.  The Kindle is replacing a massive bible with tons of paper stuffed into it.  He said he's tried a nook before also, but found the Kindle's highlighting and annotation features to be superior.  The nook wouldn't let him export notes out of the book; he had to open the book to see the notes.  His current workflow in a book is to highlight and take notes, then export those notes into Everntote for reference.  He also currently uses Calibre to convert PDF files into a format that can be directly brought into the Kindle. 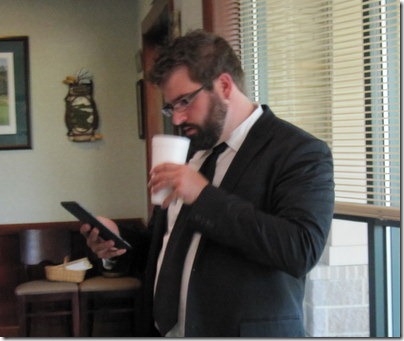 Interestingly, he still uses a paper outline for sermons.  He said he can get talking off one point and find that when he comes back to his notes, he's three pages ahead.  In these cases, the quick flipping of the paper notes works better than having to click through eInk refreshes on the smaller screen of the Kindle.

I should also mention that this was a very bright sunny summer evening and he was standing in full sunlight during the ceremony.  The eInk screen was essential in this context.  I don't know any backlit screen that could have kept up with full on direct sunlight.

Another bonus with the new 3rd generation Kindle, is that it is super light and easy to hold in one hand while performing the ceremony, and the slate grey blends into the formal setting nicely.  Even with the nice leather case (with a built in book light) the Kindle is small and light.

Even better, this Pastor blogs, is on Facebook and twitter, and his business card has a QR code on the back.  He also hooked me up with a Google+ invite.  +10 internets to Ohio. 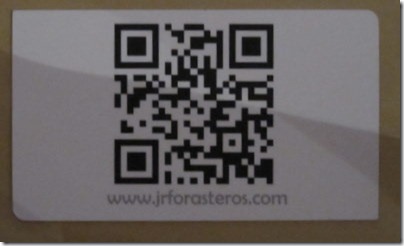 Posted by violajack at 9:31 PM No comments: Links to this post

A Detour into Smartphone Land 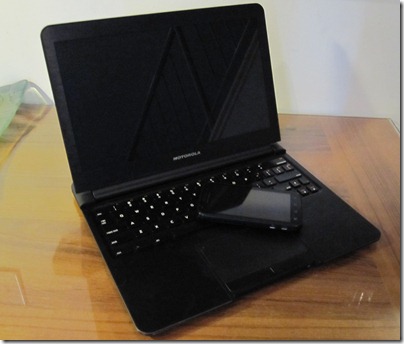 I like tablets, so why is a smartphone leading off this post?  Well, this is what I’ve been up to recently.  Enjoy the ride…

Read more »
Posted by violajack at 5:08 PM No comments: Links to this post