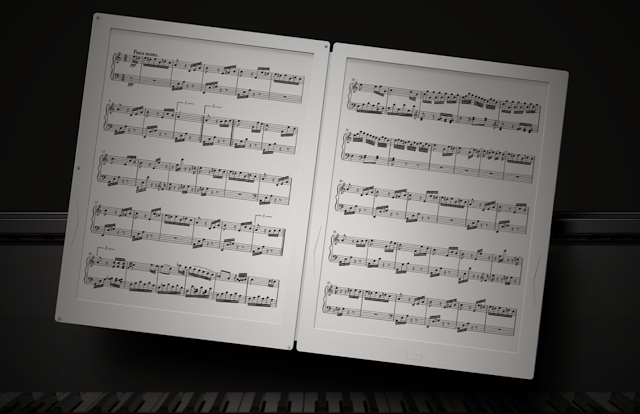 So, this thing has shown up in my news feed from several of the sites I frequent. Now that I have some experience in the news room of a major tech news site, I understand the perspective many of these bigger tech blogs are covering this from. Someone who used to play an instrument back in high school (yes, many authors cited this as their experience) is handed a press release and told to put together a news item. They have 30 minutes and a "this looks neat" attitude. And it does look neat. Unless you've been doing this for, oh, say, the last 7 years.

What is this thing? This thing is two 13.3" Mobius eInk screens, running 1200x1600 (the same resolution and slightly larger than the HP PS12 I use now), on unkown internals, with unkown software. But hey, it's got a Wacom digitizer! You can totally write on your music! So revolutionary! And you can turn the page with a tap, so much faster than flipping a physical page!

A few things based on my years of experience:

1. We've moved beyond tapping to turn. If I have to take my bow off the string to turn, it's a step back from where I am now. Yes it has Bluetooth, but the press release only says "a variety of accessories can also be connected". It's probably not a big leap to assume that would include foot pedals for page turns, but it's still a leap.

2. Two screens != better. First off, just one of these screens currently translates to an $800 price tag, so two of them is going to be unreasonably expensive. If I'm not willing to put a $1000 iPad Pro on a stand, there's no way I'm going to put a $1600 reader out at a gig.

2a. Speaking of price, at least the $1000 iPad pro can do about a million other things. Likely paying more than that for a single purpose device? Nope. My current tablet was under $300 and runs full Android.

3. Okay, so back to the two screens thing, with foot pedals and half page turn options, it no longer matters that I'm looking at one page of music versus two. I don't have to stop playing to turn, that's one of the major benefits to going digital. Loosing half page turns is a huge step back.

4. eInk was cool some years ago, but we've moved past it. I'm using my HP PS12 in the pit right now. While there are arguments that I should still have my stand on, illuminating the space around the lit up tablet screen to make things easier on my eyes, I don't need the stand light. That's one less thing for me to carry and potentially forget at gigs. But eInk isn't backlit, you'll still need that stand light, just like paper.

4a. Also, eInk flashes when it refreshes. As eInk has improved, it no longer needs to flash each page turn, but it will inevitably be the one where you really need that next page RIGHT NOW. See why I don't want to give my half page turns? I can turn several lines before I actually need the next page.

5. OMG a pen! You can write on your music! Okay.....so my TC1100 did that many years ago. This should be a standard feature of anything (including apps) purporting to replace paper sheet music. But given how many apps don't even support annotation, I suppose it is still a big deal.

Maybe I shouldn't be so harsh. I mean, it's great to see companies trying new things and inveseting in this space. But we've long past the "let's emulate paper exactly, just digital" and into "how can we make the experience of carrying/reading/performing from so much sheet music better." Just slapping together two giant eInk screens is not better than the current digital solution, even if it's a step up from paper.

Posted by violajack at 9:32 AM No comments:

When first tier manufactures move on to new and better screens, or just pass the exclusive on the screens in the their latest and greatest, second tier Chinese manufacturers get the chance to use them. You can now get a dual-booting, Windows and Android, Intel Atom based tablet behind an iPad retina screen from the likes of Onda, Teclast, Chuwi and others you've probably never heard of, all in the $200-$300 range.

You won't see them at BestBuy and you'll pay a premium if you want to get them from a place like Amazon or eBay. Your best bet, if you're brave enough, is to order direct from China through a place like GeekBuying,  BangGood, or GearBest (see a theme?).

But, it's been a while since I've been willing to tolerate a 9.7" screen for sheet music, so while the idea of Windows/Android on that screen is interesting, it's not particularly useful to me, especially since none of them support pen. However, now that Microsoft has moved to a bigger, higher density screen for the Surface Pro 4, the Surface Pro 3 screen is now available to these Chinese manufacturers.

Chuwi has slapped one of these Surface Pro 3 screens on their Hi12, packed it with an Atom processor, 4GB of RAM, and a 64 GB SSD for a fantastic sub-$300 price. Of course you have to order direct from a Chinese deal site like banggood or gearbest and hope you get a good one, since things like warranty support and quality control will also be second tier. It might be worth it in the case of the Chuwi Hi12 to get a 12", 1440p screen with, get this - an active digitizer!

So of course when one showed up on my local craigslist, how could I not get it? I mean, I totally don't have the patience to wait for shipping from China, but if I can just email some random person and go buy it, that's totally going to happen. The guy suggested a dessert place near his local BART stop, so we loaded up the kids and headed out. The kids loved the restaurant and I'm typing this on my shiny new-to-me Chuwi Hi12. 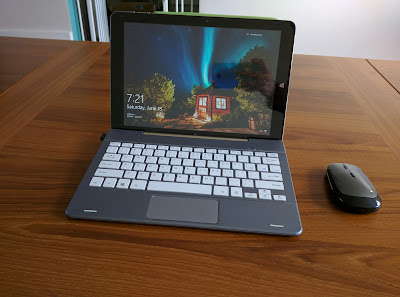 You'll notice it came with a mouse. If you're reading this, you've probably got another tab open with reviews. (I highly recommend techtablets to learn more about these machines) and everything you'll read about how terrible the trackpad is is true. I actually like the springiness and stiff feedback of the keyboard itself, but the trackpad is really terrible.

If I were buying new, I'd skip the keyboard and grab the HiPen (yes, that's what it's called) instead. Stock comes and goes on those, so to get one in a reasonable amount of time, I went with one listed on Amazon. It's still shipping from China, but it was in stock and ready to go. It'll probably be another week before it shows up, and I'll have a more in depth look at the tablet then.

Posted by violajack at 8:40 AM No comments:

It's kinda quiet in here 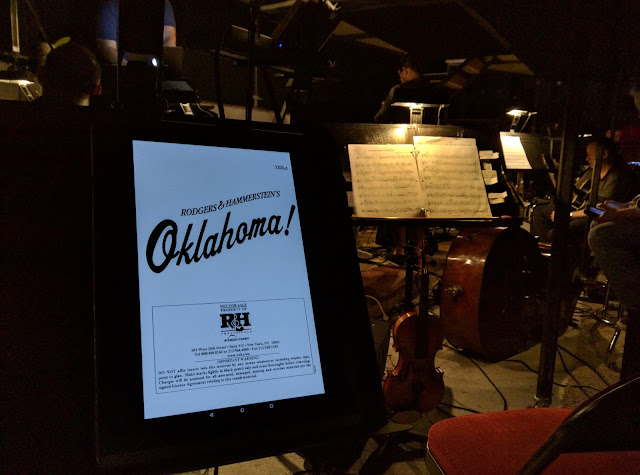 But I've been a bit busy. Because someone thought it might be a good idea to take on a show with a tech week the same week as the last week of school, culminating in a run from the school concert to the opening night of the show. Since traffic is so beyond messed up here in the Bay Area, leaving the city to head south during evening commute was no big deal since everyone is going the other way - from jobs in the valley back to SF. I was just hugely bummed to miss  out on the after-concert chatting time with students and parents.

The other reason I haven't posted much is because I've got a set up that Just Works. I mostly have material for the blog when I'm testing stuff, or interested in the Next Big Thing. For now, my HP Pro Slate 12 is doing all I need it to do.

There are two other standard size iPads in the pit and they're just so tiny looking. Several musicians have expressed interest in my set up, especially because I'm using not-an-ipad. The cellist said he's wanted to find out more about the options, but everyone he's seen is just using an iPad and he doesn't want to go that route (either too little, or too pricey). He's now stalking the one HP PS12 on ebay. It seems I grabbed mine at just the right time, as they haven't come up much recently.

I should also mention that the two iPad players in the pit are also reading inserts off of paper. I scanned my inserts, used Xodo online to merge them into main show book, used thumbnail view in Xodo on the PS12 to move them into the correct place in the score, deleted everything I didn't need, then exported the completed book. I still like to perform out of MobileSheetsPro because of the half page turns, but I could have just as easily kept it in Xodo and performed it from there.

I do have a new tablet kicking around the house right now that I'll write more about soon. It's not quite as big as the PS12, so it's not going to replace my main reader, but it'll be fun to play with and should prove an interesting Surface alternative for those who don't want to be limited to Android.

Also, the latest post over at techinmusiced has me interested in learning more about XML again. I abandoned experiments in scanning years ago, but if it's so easy to convert from PDF to XML now, I need to look into it again. And it looks like there's an app that'll cover both.
Posted by violajack at 8:09 AM 3 comments: