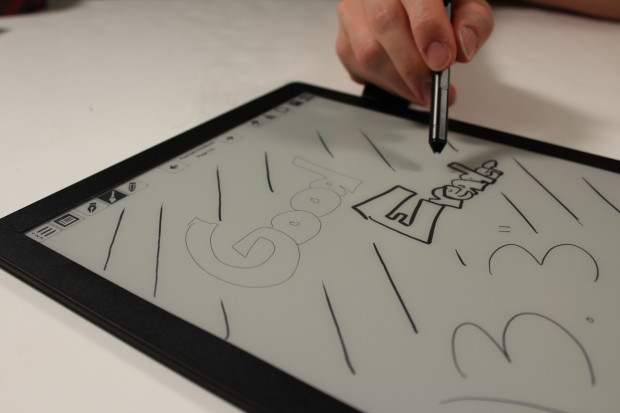 Once upon a time I had a nook. I loved the e-ink screen. I dreamed of putting music on it. A parent in my studio had the big Kindle and I dreamed of putting music on that, but he lamented how clunky the annotation options were, and that was just text. E-readers have mostly fallen out of favor since light up screened tablets can do everything and books, so unless you read enough for the light up screen to bother you, an e-ink reader is just one more thing to have to carry.

I've still dreamed of a giant e-ink reader, but after the big Kindle died, that was kind of it. Then, years later, Sony did their giant thing. But it's seriously pricey for a single purpose device when you can get an iPad Pro for not much more that does soooooo much more.

Good e-Reader is one of those niche site with a good forum and community that built up during the e-reader boom. I hung out there some when I had a nook to play with, and again when I briefly had an Entourage eDGe. Actually, it was probably the mobileread forums. I forget, sorry.

They're still around and going strong and are actually about to pull off one of those things that internet communities like to talk about. They wanted a device that no one else was making, so they decided to make their own. And they're very nearly full funded on Indiegogo.

They've got a good set up, as it will only take 60 pre-orders to go to manufacturing. The Good e-Reader 13.3 is built off a reference prototype that Netronix was showing off at CES, so the hard work is nearly done. Their work has been more about tweaking the software.

Sadly, that software is stuck at Android 4.0.4. While it has the google play store, and can run apps like Mobilesheetspro, it can't run Microsoft Office apps, which means no OneNote. That's hugely disappointing on a 13.3" e-ink screen with a Wacom digitizer.

Another huge missing piece is Bluetooth. So, even if you put Mobilesheets on it, you'll still have to tap to turn. Admittedly, it's still faster than flipping a paper page, but you have to turn every single one of them, not just every other one.

The real attraction is the 13.3" Mobius e-ink screen. The 1200x1600 resolution is good, but not great in this post-retina-display era. Also, the 4GB of storage and 512MB (yup, not even a gig) of RAM and quite outdated at this point. Even though they plan on making the firmware available to the community as open source, it's unlikely that will result in more recent versions of Android running decently on such old hardware.

Just yesterday, they blogged about how great it would be for sheet music, but I'm left disappointed by the refresh during inking and seeming lack of accuracy. They don't try to write fingerings and music they try to hand write looks sloppy, like they can't draw small enough to even get notes into a staff space accurately. But watch and see what you think:

I was quite tempted to pre-order one to play with, but while the $699 asking price is better than the Sony Digital Paper, it's still no small chunk of change.

If you want to see more, check out the Indiegogo page and watch the intro video below.


Posted by violajack at 3:21 PM No comments:

All the Android music readers I'm not using

If you search the Google Play store for sheet music reader, you'll turn up lots of options. Unlike the multitude of readers for the iPad however, the selections for Android are mostly useless. Here are the ones I've tried and the deal breakers that resulted in prompt uninstalls. There are two main types of readers, ones that are connected to a digital publisher, and ones that let you read your own music.

You'll also see lots of apps for music composition and notation as well as apps to teach music reading and improve sight reading. I'll look at some of those in another post.

In the BYOM (Bring Your Own Music ) category:

The simplest of the readers also has the simplest name - Sheet Music.
It can display music stored locally on your device or SD card and can also connect to Dropbox. And it can auto scroll the music at a set-able speed. That's it. No bookmarking, no set lists, no library management, no annotation, no editing, just scrolling display.

The slightly more feature full Orpheus does all of those things (minus auto scrolling) and includes set lists and basic annotation tools. There is no way to create a bookmark or otherwise define a location in a large PDF, so each tune has to be brought in as its own file. The real deal breaker here is that the annotation is limited to one very fat red pen. You cannot change the color, nor can you change the thickness. The developer has addressed this in the FAQ's - Orpheus is built on the muPDF tools and as such, is limited to those tools. So, unless there are plans to rewrite Orpheus from the ground up with a new PDF engine (highly unlikely), the annotation tools will always be limited to this unusably fat red pen.

And in the Read Only Music From Our Service category:

Music Notes
The app is an extension of the online store. They have some interesting music - most notably nice arrangements of pop music useful for gigging groups and student ensembles, but selection is otherwise limited and expensive. Even if I were to buy a few pieces from MusicNotes the publisher, I would most likely put those PDFs in my Dropbox and open them in the reader I'm using for everything else (MobileSheetsPro).

It should be noted that music from MusicNotes does have some neat tricks that uploaded PDFs can't do. You can change key and tempo and some music supports karaoke-style light up as you go notes.

VSheetMusic
This is an extension app of the virtualsheetmusic.com service. I did purchase an annual membership some time ago and downloaded lots of nice clean PDFs of solo and chamber music. Yes, I could have downloaded everything for free from IMSLP, but the clean formatted PDFs were worth the small annual fee to me. Sadly, larger collections are not free with the annual membership. But, now that my membership has expired, I can't use the app to sync songs I've downloaded in the past. So, once again, I'm going to just take PDFs I've downloaded from this service, drop them into my Dropbox, and open them MobileSheetsPro.

I should also mention that both of these publisher's apps simply open the website for many tasks, like purchasing more music, so they really offer nearly zero value over just opening the website in a browser and using another app to display the PDFs after you've downloaded them.

So, what am I using? MobileSheets. Go get it. It does everything and then some (I'm still poking around and finding new things even after performing with it a few times now.) There's even a free version that's only limited in library size so you can really poke at all the features to see if it will work for you. Seriously, if you have an Android tablet and even a passing interest in using it for music you need MobileSheets.
Posted by violajack at 12:37 PM No comments: