I finally got a Surface Book

Thanks to the magic of craigslist, I found a well loved base model at a price I was willing to pay. I've been so tempted by these for so long I'm very happy to finally have one. It's a fantastic laptop, but the real fun is using the 13.5" screen for music. It made its Pops debut this weekend: 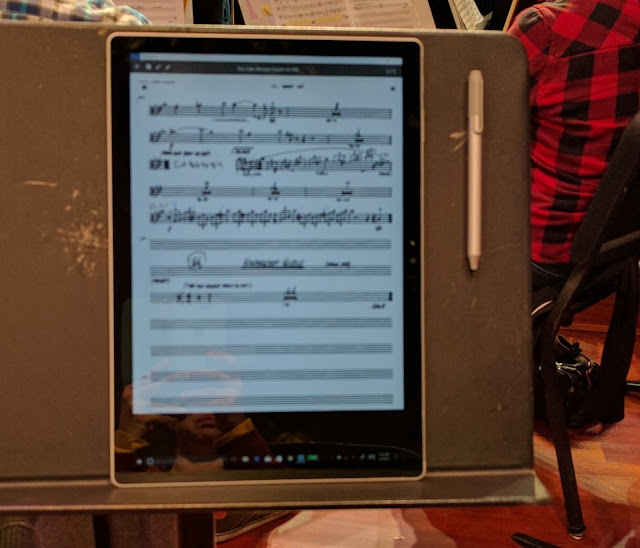 Bonus! The magnetic surface pen sticks to the stand. The extra height vs a 4:3 screen doesn't look super useful on this page as it's cropped short, but many pages come out taller than 4:3 and are rendered narrower on the screen to fit height. At 3:2, you get room for tools and information bars at the top and bottom and all pages take full advantage of the width of the screen.

My biggest reservations about using the Surface Book's clipboard (the detachable screen/tablet part) were about having something so pricey on my stand and the potential battery life issues since most reviews pegged the clipboard at only about 4 hours. The price issue was mitigated by the craigslist deal as I'm into this Surface Book for less than an iPad Pro and Pencil and there are two of those at the Pops too. Also, I realize I've never actually had anything bad happen to any of my machines at any gig in the many years I've been doing this now. I mean, it only takes once, but so far, I've never even had a close call.

The battery life issue is a bit more of an actual issue. In addition to looking for a cheap deal, I really did not want an i7 due to the fact that it scored about 30 minutes less in most battery drain tests. The difference between 4 hours on the i5 and 3.5 hours for an i7 is kind of a big deal in a 3 hour rehearsal. Sure enough, my range anxiety ramped up to 11 when battery bar turned red in the last 10 minutes of rehearsal. It says 50 minutes remaining, but turning red is not reassuring. 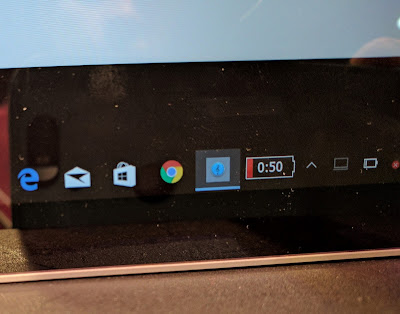 Luckily it made it through a 45 minute sound check and then a 2 hour concert only barely going yellow. I know I can always throw it on the base, but that's a less ideal solution compared to how beautifully thin the clipboard is on its own.

I did have to use it in draw mode (turned backwards and folded down over the base) when I used it to take notes at an all day bow workshop. It lasted through the morning session on its own and I added the base through the afternoon. 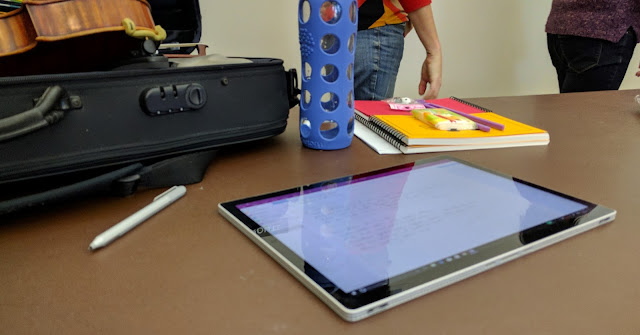 I'm also really enjoying it as my primary computer. I'm excited to see where Microsoft will go with this form factor and what other manufacturers might jump on this larger detachable size.
Posted by violajack at 5:11 PM No comments: Links to this post