HTC Flyer Does the Media Booth 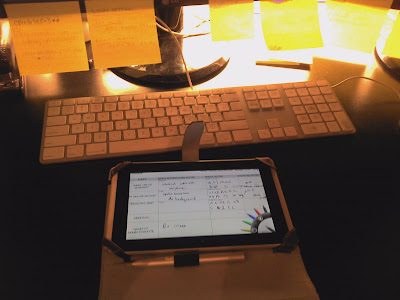 A few weekends ago, I had the opportunity to put the Flyer to the test in the media booth. Our church runs backgrounds, lyrics, sermon slides, and other media from a tower in the booth running Pro Presenter 4. I sit right next to the video producer and was also on iris duty during a short drama vignette.

The service agenda comes in Word format and was emailed to me, but is also available online. Our church uses Planning Center for organizing people for each weekend service. Planning Center has an Android app that would allow me to download all the files associated with a particular service. Either way, the Word document is handled by Polaris Office on the Flyer, which supports the pen. So I was able to ink my notes right over the agenda.

The 7” screen is not quite as nice to work with as the 10” screen on the TC1100 I normally use for this purpose. I did feel cramped on occasion, but the capacitive multitouch screen made zooming easy. The other nice thing about working with the Flyer in this context, is that you can only ink with the pen, so it never mistook my fingers when zooming or panning as ink.

It’s definitely a portable option for annotating Word documents, and the battery goes all day, so I never had to worry about it. I was able to switch over to the notes app during one of the services to take notes for myself. I’m calling it a success.
Posted by violajack at 9:45 PM No comments: Links to this post

An iPad with ForScore at the Pops 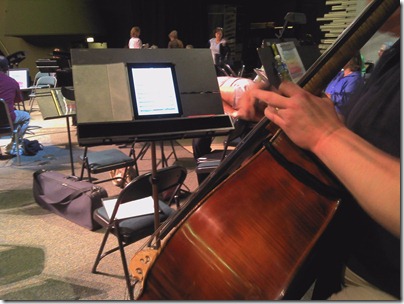 The digital sheet music is catching on!  At rehearsal this past Tuesday, one of the bass players unpacked an iPad and a wireless page turn pedal.  I think it’s a PageFlip, but I didn’t look closely enough to see for sure.  I wasn’t expecting so much excitement, so I only had my phone camera to take pictures.  I watched him turn a few pages, and didn’t notice any lag coming from the fact that it’s running over bluetooth rather than wired. I’ve just fought with so many bluetooth pairing issues with other devices that I’m not sure I’m ready to trust it, but I feel bad about the wire that hangs down from my set up now. 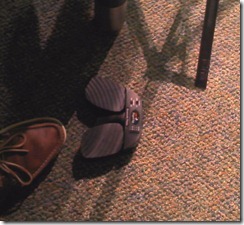 He was using ForScore for the music, which was neat to see, as I use UnrealBook on the iPad.  Annotation in ForScore is quite impressive.  You can draw by hand (or capacitive pen, like you see on the stand), or insert stamps from a variety of pre-set symbols.  He had done the fingerings and accidental reminders all from stamps rather than handwriting them in. 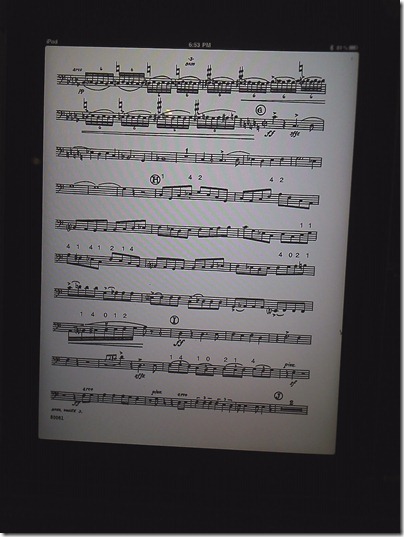 It still seems more cumbersome and less natural than just writing things in during rehearsal, but all of the stamped stuff was inserted during his practice time at home and was all ready to go by rehearsal.  While my preference would still be an active digitizer for really accurate handwritten annotation, I can see how the stamps are a great solution for a device that doesn’t have an active digitizer available.  They come out clear and easy to read and live in a dedicated space above the staff. 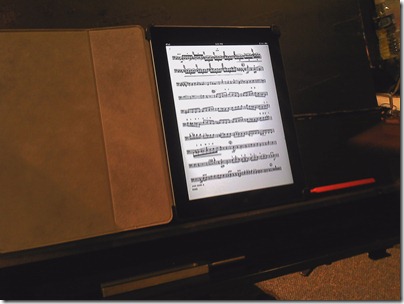 The violist who shared a stand with me while I tested the LE1600 (12” 4:3 screen) was also checking out the set up and she commented on how small it was.  He jokingly said “it’s only a bass part” and then pointed out that with the brightness up high enough, the display was clear enough to be readable.

This reminds me that I need to prepare for the concert tomorrow.  I read off paper *gasp* for the first time in a while at the dress rehearsal, as I didn’t get time to prepare the digital score ahead of time.  I have the PDF, and I did send it to a Journal note, but there were too many extra blank pages, and I just didn’t have the time to clean it up before leaving for the rehearsal. (Yes this means I only skimmed the music ahead of time as a PDF and didn’t really practice it before the rehearsal.  This set is mostly pieces we’ve played before.  There were only a few new pieces and they were quite sight-readable.)  I managed to make all my page turns, but it wasn’t nearly as nice as tapping a footpedal.  Also, my spot on the stage is dim and I’d rather work with light-up music than deal with a stand light.

Posted by violajack at 9:42 AM 7 comments: Links to this post

Disclaimer: I realize I am not the first person to do this, but since it came out of a real conversation at work, I just had to. 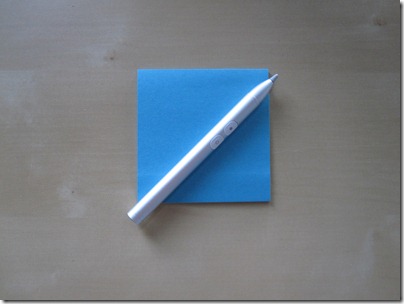 So, yesterday, at the end of the day, the boss’s kid and some of his friends were wandering around the office.  Drawn in by the lure of intern M&Ms, they came over to chat.  Boys at that age can be so fun to chat with.  One of them asked about my tablet, the HTC Flyer.  I showed them the notes app and a webpage I had been working on marking up.  When the boss came to collect them, he mentioned a new development in portable note-taking called “paper.”  I’m all for trying new things, so I decided to give it a go.

Conveniently, there was a neat, super small form factor version of the paper called stickies on a nearby desk.  I pulled the pad of stickes over to try it out.  Sadly, it didn’t respond to my Flyer pen, which was the only one I had on me at the time, so I had to wait until I could find the right stylus.

My husband sometimes works with paper, so we have some at home for me to try out.  I also have access to several types of pens and styluses at home, so I was pretty confident that I could find one that was compatible with paper.

It was a bit more challenging than I thought to find the right one.  If you’ve seen my inking comparisons video, you can see just how confusing the current state of pens and incompatibility can be.  None of my Wacom pens worked, so I can safely conclude that paper is not Penabled.  The capacitive pen I use with the iPad was a no-go also.  I finally ran into some luck with my 3-in-1 stylus.  The plastic tip that I use with resistive screens didn’t work, but both the “pen” tip and the “pencil” tip worked!  Although you do have to be careful which one you choose before you start, as the pen tip does not have erase functionality like the pencil tip does.

Once I found a working stylus, I was ready to get inking.  Here we get to the good part, the inking is smooth and palm rejection is pretty good.  Your hand won’t generate ink or vectoring, but it can interfere with ink that is already down, generating “smudging” if you’re not careful.  The texture of the paper feels nice under the tip.  The pen just works, but the pencil end occasionally requires pressing a button to get more lead to come out to continue writing.

One nice thing about the paper is that it doesn’t require any special programs or apps to do the note-taking, you just grab it and start writing.  Some other advantages include spectacular battery life.  The paper can last decades before the display starts to yellow a bit.  It’s very lightweight and available in a wide variety of sizes and form factors.  There is even a neat version with a little adhesive strip in the back so the smaller ones can be stuck to things.

However, I’m finding the paper to be missing several options I’m used to having.  There is no way to add space in the middle or move the ink around once it’s down.  While you can add images or documents to the paper, it requires a separate piece of hardware called a printer.  Also, once you’ve got the image or document down, you can’t move it.

Another thing that requires separate hardware is OCR or handwriting recognition or conversion to text.  You’ll have to scan the paper in to have a computer run the OCR with another program or app.

Organization is also an issue with paper.  I’m used to having the folder system built in and being able to tag notes, but with the paper notes, you just have to keep track of where you put them.  If you want folders, you’ll have to get them separately.

Another thing I miss is the infinite page.  The paper doesn’t get bigger as you write, so when you fill a page, you have to go get another one.  Paper is frequently packaged in bundles or notebooks to help you keep extra pages handy.

So, paper clearly does have several advantages, but is it enough to get me to switch?  I’m afraid I just can’t give up my syncable, scrollable, searchable ink.  Also, I hear they have to cut down trees to make the paper.  I like trees.  I think paper is not for me.
Posted by violajack at 6:12 PM 2 comments: Links to this post

This is a repost of my review for TabletPCBuzz.com.

In a market that’s now being flooded with 10” Honeycomb tablets, HTC is already being different with their 7” Gingerbread based Flyer. The real stand out feature of this tablet is the n-trig duo sense pen and touch digitizer. HTC is no stranger to working with Android, with their Sense interface adorning many Android based smartphones. This is Sense’s first appearance on a larger tablet, in addition to the first one to hit the market with an active digitizer. So, how does it work? Is it worth adding a pen to an Android tablet? Short answer – oh yes. Long answer – read on…..

Read more »
Posted by violajack at 3:57 PM No comments: Links to this post