So, I inherited a Ukulele program... 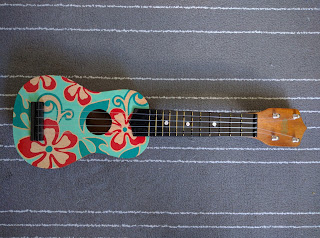 Not on purpose, but here I am. During back to school night at my older son's new school, the music teacher kept saying things like "hopefully the new teacher will keep going with this." (I missed the beginning of her talk as the Pre-K classes are separate from the Elementary program and it overlapped a bit. I didn't technically need to attend the specials part, since the Pre-K don't participate in those classes, but I wanted to know what the music teacher was doing out of professional curiosity.) Of course, I went up to the principal to get more details immediately after. Turns out, the current music teacher's husband had gotten a job up in Oregon, so she had put in her two weeks notice the day before.

I promptly updated my resume and sent it on in. I like private teaching. A lot. But with two small children, the logistics of childcare is simply easier if I can work during the school day.

The previous teacher had already sold the school on the idea that the middle school group should play ukulele, and the school had just invested in a classroom set. So, it was pretty much expected that the new teacher would actually use them. The younger grades play recorder and have access to glockenspiels as well.

I finished Music Mind Games training literally the day before I interviewed, which significantly beefed up my tool box for general music teaching. I played recorder in the early music lab in my undergrad, so not only do I not mind teaching recorder, I actually like it. But the ukulele was one I'd never touched aside from occasionally trying to tune this fun little toy a neighbor had given us when she moved out and didn't want to take it with her.

Luckily, a favorite blogger of mine is well down this path of using the ukulele in a middle school music program. He's spun off a new blog to chronicle that journey, and share resources, called Ukestuff.

I upgraded myself to a nice tenor thanks to Amazon, and I have another on the way. Because. 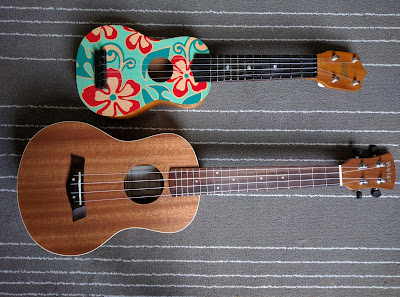 Posted by violajack at 4:39 PM No comments: Links to this post