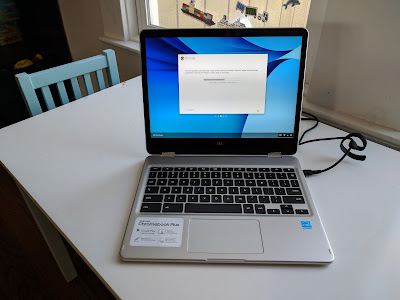 I couldn't help myself. Actually, what happened is that I've been using an older Thinkpad Tablet 2 as my studio tablet for a few months and I'm always impressed with how buttery smooth the inking is. Not even my fancy Surface Book is so smooth. Why? Because the Thinkpad uses Wacom's older, batteryless EMR technology. The Surface Book is using N-trig's latest and greatest (which they now own), but it's just not the same. Even Wacom's newer AES solution, which is similar in that the pen requires a battery, is not quite up to the smoothness of the older EMR setup.

It looked like EMR was basically dead though with Microsoft invested in N-trig's technology and most other tablets using Wacom's AES pens (or the less idea Synaptics active pen). But then Samsung announced the Galaxy Book line with S-pens. Samsung's S-pen (the little toothpick stylus that comes in the Galaxy Note phone line) is basically a Wacom EMR digitizer!

That got me all interested again and I remembered I had an older Galaxy Note 8 hiding under a pile of stuff on a desk. I had been using that as my studio tablet, but the digitizer was going bad and had a dead spot right where I most needed to write stuff. It hadn't been charged in months. Whatever was going on with the digitizer seems to have magically fixed itself while the tablet was dead, but now the battery is shot and runs down normally to about half then just jumps quickly down to empty. I might replace it if I'm feeling project-y in the future.

Then I remembered I don't even have to wait for the Galaxy Book to come out. Samsung's Chromebook Plus also has an S-pen, access to the Google Play store on Chrome OS, and a beautiful 12.3" 2400x1600 screen. I had forgotten about it as it's been so long since it was announced.

Here it is next to the similarly sized Chuwi Hi12 and the slightly larger Surface Book: 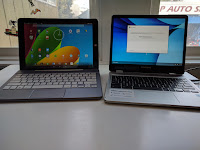 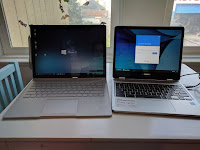 It looks bigger than the Chuwi because it has a much larger chin (the bezel under the screen) which makes it sit up higher.

I just finished the set up and installed a few Android apps and set it aside to charge while I get this typed out, but so far I'm very impressed. It's thin and light with a great screen. The pen is fluid in everything I've tried so far and my comfy older Thinkpad stylus works and feels much better than the toothpick that comes in the machine. But the fact that the S-pen is in the machine at all is huge. If I forget the bigger pen, I've always got one built in. Both One Note and Mobile Sheets Pro work smoothly, which means this machine has potential in the studio and at gigs, although a fold around convertible is less ideal on a music stand versus a slate tablet.

I'm looking forward to seeing what this platform can do also. I haven't really used a chromebook in a long time. I was lucky enough to get a Cr-48 from Google back in the day, but that was years and years ago. I think I started it up a year (or more?) ago to see what ChromeOS was up to, and while it updated to the latest build, it was not a pleasant experience. But I remember being so much more productive when using the Chromebook back in the day. There's something to be said about the simplicity of the set up. I wonder if it will still feel that way with access to the Google play store making it as much of a potential distraction factory as my phone.
Posted by violajack at 3:50 PM No comments: Links to this post