Blue Yeti Pro in the House 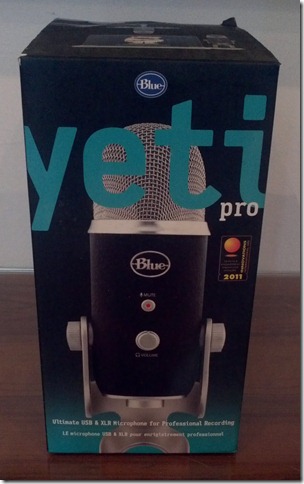 The kind folks at Blue have lent me Yeti Pro to test drive, and I can’t wait to see what this thing can do.  With dual outputs (USB and XLR) this mic should be equally at home in the teaching studio plugged directly into the tablet via USB, and in the rehearsal studio plugged into the big audio rig via XLR.

Posted by violajack at 1:59 PM No comments: 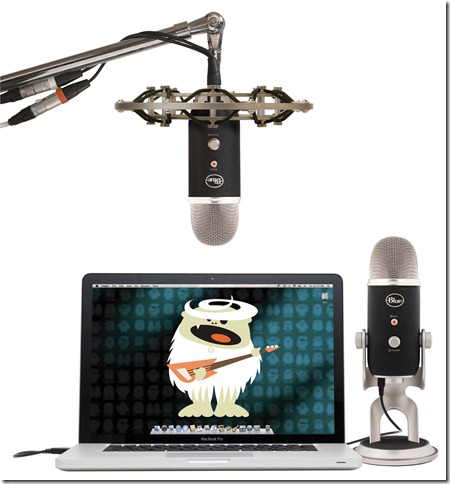 I’ve been using the original Yeti in the studio and at home since it came out.  My husband recently “borrowed” it for recording at his band’s rehearsal studio.  I hope it makes it home again some day, but it might get to stay there now that Blue has announced the new Yeti Pro. 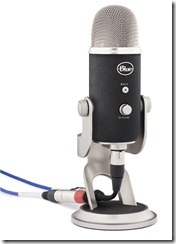 I did get to see the Yeti Pro at CES, but I didn’t get information on when it might be released, but now it’s official.  Our only complaint with the original Yeti was that it was USB only.  While that’s okay for me, since I mostly work from a computer, my husband has a full set-up and would prefer an XLR connection.

Enter the Yeti Pro – dual outputs, USB and XLR!  It looks just like the original Yeti, but in black.  It has the same triple array custom condenser capsules that can record in cardioid, omni, stereo, and bi-directional.  It records at 24bit/192kHz, the highest digital resolution on the market.

The Yeti Pro is available now from authorized Blue Microphone dealers with an MSRP of $249.  See the full press release after the break.

The Gigging iPad Caught on Camera

As promised, I remembered to take a picture this time. I was also able to start a draft of this post during the ceremony thanks to a new tool/toy,but more on that later.  It turned out to be the shortest ceremony ever, so I only got one sentence done before the pronouncement. The only thing after that is presenting the new couple, then it's recessional time.

A side note - we set up in the back so no one could see me thumb typing away, and I was still the first member of our group to notice we needed to be ready to play. The ceremony is always priority. I try to be really careful to make sure my toys don't become a distraction.

So that new toy? It's really just an upgrade on a current one. I picked up an HTC EVO view.  It's basically the exact same thing as my Flyer, but with a 4G radio from Sprint.  I was tethering from my phone when I wanted to be online, but that's a hack so I try to avoid doing it too much. It's great to have always on internet on the tablet.  In fact, that's how I'm posting this, well out of WiFi range, from the Blogger app on the View. I also took this picture with the View, making it easy to add to the blog post. I'm getting pretty good at thumb typing.

It's making me think I should pick up a 3G iPad for gigging whenever the next version comes out, but there's something to be said for separating tasks. I wouldn't want a notification popping up while I'm playing. Then again, I could just turn that off while I'm playing. Hmmm....

Posted by violajack at 11:31 AM No comments:

Digital Trio Gigging: An iPad, ForScore, and the Footime Pedal

I keep forgetting to take pictures of the iPad in action, but you all know what an iPad looks like.  My recent digitizing efforts have paid off as I've now played several weddings from the iPad.

Before I get into the successful weddings I've played with an iPad in front of me, I should also mention that I've run into my first real bit of resistance to digital music.  I've had open minded stand partners that were willing to work with me and try out the digital scores.  I think that was made easier by the ease of using an active pen with windows; there was no learning curve to putting notes in the music.  But last weekend, I had a conductor tell me that he would not allow me to read from the iPad.  There was no good reason other than he was not comfortable with it.  Last I checked, he didn't have to read my music, but whatever, I had my paper parts as back up (which required windclips and a stand light, neither of which the iPad would have needed).  After the conductor told me I could not use my iPad, he also noticed the bassist was using one as well and tried to tell him it was not allowed.  After explaining that he would have gladly made a book had the conductor said something after the previous rehearsal (that I had to miss) where he had also been working from his iPad, he got to keep his.

But back to happier stories.  I just got back from yet another wedding gig with my trio, playing from the iPad, and I will never go back to the paper books.  There are several reasons:

But I'm such a huge advocate for windows based tablets with active digitizers, why am I using an iPad?  Also, several reasons:

All in all, I'm really enjoying the iPad for use with my trio.  Our violinist is also seriously considering the setup as well.  He has an iPad and is looking into getting a foot pedal.  Our cellist has declared the iPad way too small for her, and wouldn't be comfortable having to read from it.  We are always in shade for outdoor gigs (contractually as direct sun would be bad for the instruments) but I have run into some glare issues.  It's only been annoying reflections though, nothing unreadable with the brightness all the way up.  I'm considering a matte screen protector, but I have a hard enough time getting those right on a phone.  We have too many cats for me to get 10" of screen protector down without getting a cat hair stuck under it.

So that's what I've been up to, and will be up to for the next several weekends.  I'll try to grab some pictures next time.
Posted by violajack at 7:34 PM 4 comments: