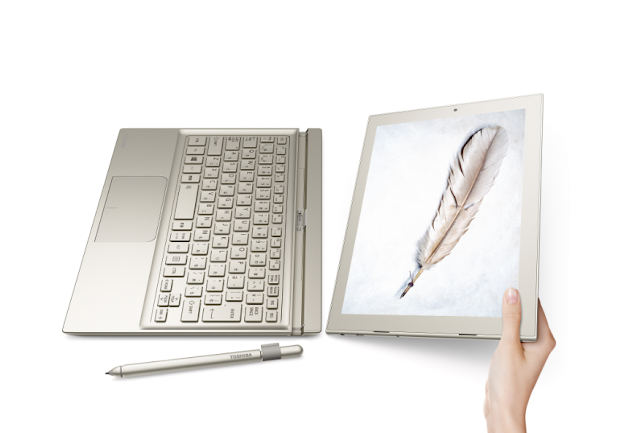 The DynaPad is basically a netbook in the Surface Pro form factor, with a Wacom pen. Which is basically the ideal sheet music reader (for my workflow at least). I really like the size of the Surface Pro 3 and the workflow with Xodo docs on Windows 10, but even the i3 is really overkill for just reading/annotating PDFs (and checking Facebook in the break).

Toshiba's DynaPad won't win any benchmark awards with it's Atom x5, and 64GB of eMMC storage isn't spectacular, but at least they went with 4GB of RAM. I'm hoping this is a general trend in the race to the bottom specs - 32GB of storage and 2GB of RAM is really just not going to cut it anymore. Although I have no experience with the latest generation Atom x-series chips, I'd imagine they'd be up to the task of PDF display, unless you have some crazy high DPI scans with layers and layers of markup.

The big plus to trimming back the specs to bare minimum is that you get a crazy thin and light slab for a good price. It's the same thickness as the iPad Pro (6.9mm) while coming in lighter (1.25lbs vs 1.57lbs for the wifi only iPad Pro).

The screen is the same size and aspect ratio as the Surface Pro 3 (12" 3:2), just a lower resolution, 1920x1280. The IPS display has an anti-glare and anti-fingerprint coating and should be just find for music at that resolution. Remember, I started with the original iPad at 1024x768 (after a brief stint with the TC1100, also 1024x768), and while it wasn't the most beautiful screen in the world, it was plenty readable.

Initial news reports mentioned an asking price of $570, which would have been great, but it looks like they've chosen to bundle the keyboard, driving the price up to $650, still not bad at all. Less than an iPad Pro, a little less than the discounted Surface Pro 3, and just a bit more than the 64GB iPad Air 2.

The Wacom AES pen should deliver a writing experience as good as any of the higher end tablets and comparable to grabbing a pencil off the stand to mark up sheet music.

There aren't really many reviews out yet, but there are some hands on videos from CES. It's shipping now though, so I'll be keeping an eye out for actual user reviews. 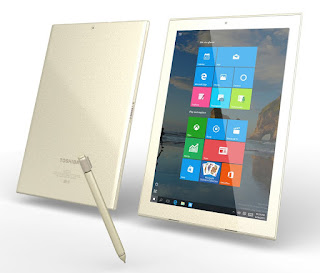 Posted by violajack at 2:53 PM