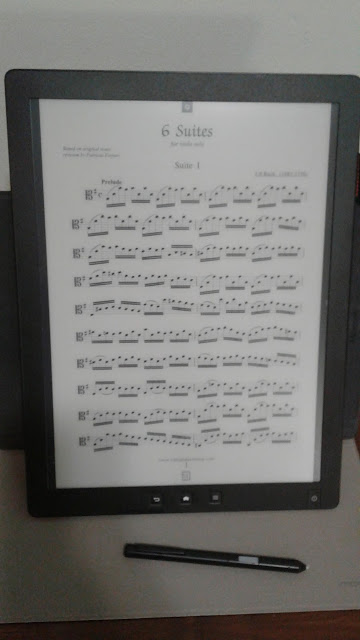 Why yes, that is 13.3" of e-ink. (And an unfortunately blurry image, I'm using a spare phone for reasons.)

It's the Good e-Reader 13.3, from the Indiegogo campaign (well, actually from craigslist from a person who actually backed the campaign some time ago).

It's......interesting. I'll be working on the set up, but for now, here are some quick impressions:

Cons: Android version is old (4.0.4, really old), previous owner reset it which wiped the google play store, goodereader recently took down the support forums so I have no way to restore, goodereader app store is down so I have no other way to load things, sideloading has failed so far, there are some questionable business practices going on and it looks like support may be non-existent for this device

So, it looks like I'll be spending quite a bit of time trying to get this thing up and running again. I can get by with the built in PDF reader for now, but I'd rather try others. I'd really like to get the google play store back, or at least get the built in app store running again. I'm making progress on the Google Play Store, but the current version I have loaded crashes as soon as I attempt to install anything.

But I knew most of this going in. I knew at the very worst, I'd get a giant e-ink screen with a built in PDF reader and stylus. And I got that. It works. I put my entire music library on an SD card and it all loads just fine. And I can write on it. So, maybe I'll just use the built in stuff for a while and see how it goes.

Side note: this will never be a performance solution for me, this is purely for fun and practicing at home. There is no bluetooth, and no USB OTG support, so there is no way to connect a foot pedal.
Posted by violajack at 1:42 PM