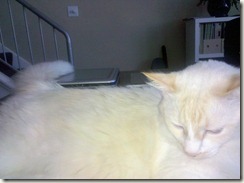 Not the cat, the thing hiding behind it.  The cat is Mr Fluff, and like all good cats, as soon as I had a good comparison shot set up, he came and sat in front of it.  Amazing how they do that.  Anyway, though the wonders of craigslist, I am now the proud hopping-on-the-bandwagon owner of an iPad.  There are already plenty of reviews of the iPad on the internet, so I’m not going to bother with that.  But what I will present are some nifty comparison shots of the new iPad and the tc1100 I’ve been using.  They’re not as far off as I had initially thought when I set this up.

Yes, the tc1100 is much thicker with its keyboard attached.  However, the iPad keyboard dock would still sit up higher thanks to its rather awkward and not portable sticky-up bit.

The nice thing about the tc1100 versus convertible notebooks is that the keyboard is completely detachable, making it not much thicker than the iPad. 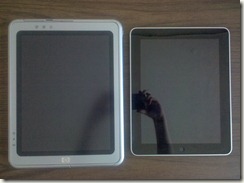 The overall footprint of the tc1100 is a bit bigger due to having a 10.4” screen versus the iPad’s 9.7”.  The tc’s bezel is also a bit thicker to accommodate 3 indicator LEDs and 3 pen-sensitive buttons.  The iPad’s bezel has a home button and an ambient light sensor.  Both lack any sort of webcam.  Notice the extra glossiness of the iPad.

The iPad has one, sort of. 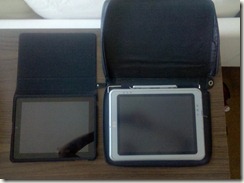 My iPad happened to come with the apple case, which would not have been my first choice of cases, but it was free with the iPad, and free is my kind of case.  I recently came into a bunch of accessories for the tc1100 (a post for later), which included an executive leather case.  The tc1100 clips in by the keyboard dock or more clips on the keyboard itself, so the case can be used with or without the keyboard on.

It is rather bulky.  Then again, I hardly ever actually have the keyboard attached, and I don’t really see myself using this case anyway.  It’s just here for comparison. 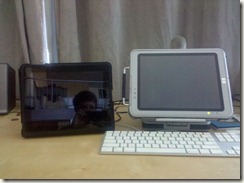 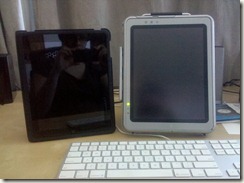 One of the nice thing about the dock is that it allows rotating to portrait, in addition to adding a ton more ports and a DVD drive.  The iPad dock does not offer quite so many extras, and will only hold the iPad in portrait.  I don’t have one of those anyway, so this is the iPad standing up in its apple case.

The iPad in no way replaces the tc1100, but it is a neat toy.  I will try to get a pogo or similar stylus for it to see if I can do some writing with it.  The cheapy stylus I picked up from Central Computer is already in the trash and not worth writing about.  I’ve seen some good videos with Penultimate and a pogo though, so it’s still worth trying with a good stylus.  The iPad might even get a turn in the media booth, even if it can’t replace the tc1100 for studio duty.
Posted by violajack at 4:04 PM