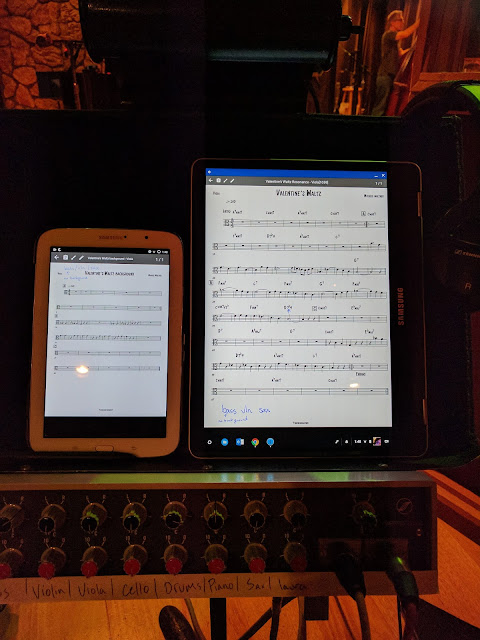 After a frustrating experience trying to write on my Surface book the day before, I decided to go with a tablet that I know allows for much smoother writing. In the interest of pen compatibility, I chose the Galaxy Note 8.0 as my secondary screen. Each of these machines has an spen stored in a silo on the machine, but I also have a Bamboo smart pen, which is a full sized stylus compatible with the latest generation of Samsung Wacom EMR based tablets. That means I can leave the little toothpicks safely in their silos and use one full sized pen on both machines.

The Galaxy Note 8.0 is only an 8" screen, which is really very small for music. It was acceptable for the simple background lines, but I would not want to read anything more complex off such a tiny screen. I mostly brought it for fun and to see if it would work at all. I had the Surface in my bag in case I wanted something bigger.

I ended up just turning it sideways a lot of the time since the background parts were only a few lines each and fit without needing to scroll. 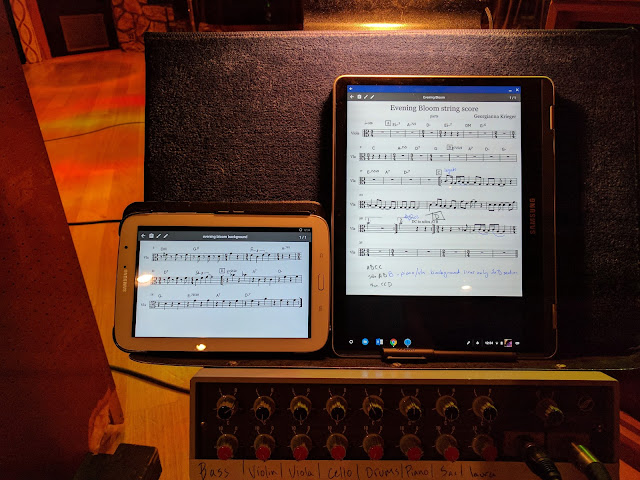 I may or may not switch to the Chromebook plus for music full time. It's hard to say no to the giant Surface book screen when I know I won't need to write much on it.

However, I'm typing all these posts from the Chromebook right now. I have to say, I'm pretty impressed by this little thing. The form factor is amazing. The spen is still miles ahead of the Surface pen. I can do almost everything I need between Chrome and a few Android apps, which run quite well on the Chromebook.
Posted by violajack at 1:42 PM