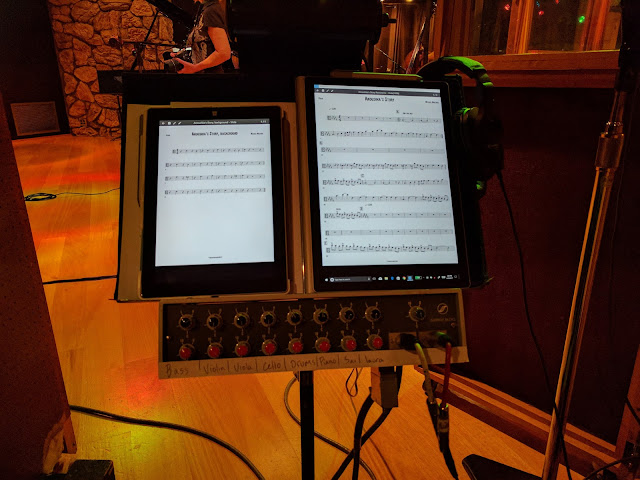 Resonance, the jazz group I play with, headed out to the studio this weekend to record our 2nd CD. I've been using the Surface book for performance recently for the big screen, even though I've been using the Chromebook plus more often for rehearsals.

The Surface book on the right is flipped back on the keyboard base for battery life since we were in the studio for 8 hours each day. There's no way the clipboard portion on its own would have lasted.

On the left is the smaller Surface 3 (non pro). At 10.5 inches, I wouldn't use it full time, but in this scenario, having a second tablet to display the background lines for solos was helpful. The main chart and background lines are currently in separate files and I never got around to combining them. I could have put them in a single file and used my footpedal to switch between pages, or created set lists for each tune with all the needed pages, but I figured since I have a million tablets floating around, I'd just use a secondary screen for those parts.

Yes it's overkill. Yes it was fun.

Except for the pen experience. That was terrible. I normally grab the Surface book for performances because of the bigger screen without worrying about the pen performance because there's not much writing to do in performance.

However, due to a bug in MobileSheets (which has already been fixed) my annotations didn't transfer between the backup I made on my Chromebook plus and when I restored it to the Surface book. Of course, I also didn't take the time to verify my restore before heading out the door. I mean, I made sure all the tunes restored, but I didn't check closely enough apparently. Luckily, we've been practicing enough that I didn't really need the annotations, but I rewrote a few things from memory and wanted to write in some new ideas for a solo I have in one of the tunes.

By the end of the session, I was so frustrated with the Surface book that I decided to just bring the Chromebook the next day.